Capitol Reef State Park was hard to leave, but late of an afternoon we bid farewell at last.  We were headed south and west in the general direction of Bryce Canyon National Park, and this would mean crossing the mountains.  We could see storm clouds building, grey ominous skies and what looked like snow, but with some trepidation we decided to press ahead, confident in the little red trailer’s furnace to keep us warm.  Altitude climbed and temperature dropped as we traveled Scenic Byway 12 up toward Bolder Mountain.  The considerate folks of the Utah Department of Transportation had created several pull-outs along the route, presumably as means of reducing the number of cars which go over the steep cliffs as they marvel at the stunning view of the canyon lands below, and we stopped frequently to ohh and ahh at the view and assess the weather.

By 6pm we knew that the night would be quite cold indeed and, instead of pressing upward, we pulled off at mile 109 into a little off-road space to set up camp for the night at 8,500 feet.  There was a stone fire ring, so we chopped our wood for kindling, and soon enough we had a small, reassuring blaze for warmth and a dutch oven dinner of fresh-made quick-biscuits, pasta, and pie from Gifford House. 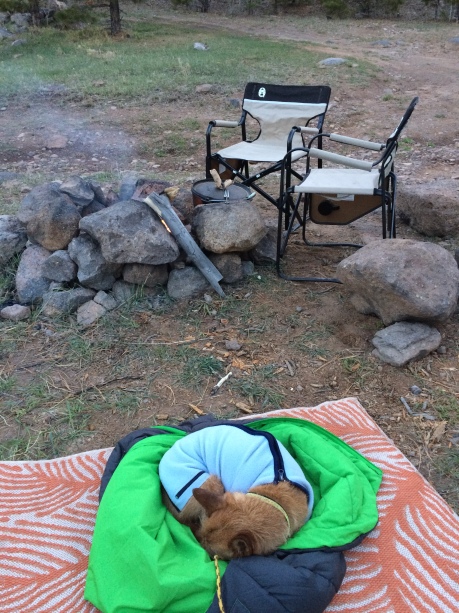 Fearing for our water pipes, we decided to sleep with heat on.  Rocinante has a little forced-air furnace, with a thermostat mounted on the wall (and a CO detector at floor level) just like you might have at home.  There’s a little heater vent under the bed, so if you pull out one of the clothing storage bins and put it in the only available floor space remaining, you can bring the trailer up to toasty very quickly.  By analogy, imagine having a furnace dedicated to warming your closet; it doesn’t take much.  We set the thermostat to the lowest setting, and went to bed, and were so warm overnight that at some point in the early hours, I woke to throw off covers and to take Katie out of her little sweater.  Toasty inside, and outside it was snowing.

We had turned the truck and trailer around for an easier getaway in case we had inches of snow (we did not; just a dusting) so we opted for yoghurt in the car for breakfast, and by mid-morning we were down the mountain.

Reaching the valley floor, signs of civilization in the form of farms and houses began to appear, and just shortly afterward, the welcome sign of a little public museum, the Anasazi State Park Museum.  What a perfect morning stop to catch some culture and regroup on where we were headed.  Plus, a warm clean bathroom and a few bars of internet wouldn’t go amiss earlier.  Maslow’s Hierarch of Needs interpreted for museum goers will be familiar to my colleagues – we could enjoy the exhibits AFTER knowing we’d have time in the gift shop, eaten a snack  from the cafeteria, and had a chance to use the restroom.

And the exhibits themselves were indeed quite a delight.  I recommend this little museum to any passers by.  We toured the displays that highlighted housing, food sources, and archaeology, reading labels with content from what they referred to, with equal weight for each, as the scientific view and the native voice on the matter.

Outside, we crawled through a recreated dwelling and pondered the archaeological remains of a similar village which inspired it.

In the gift shop we found a treasure on the wall; a beautifully decorated arrow created by a local Bittersprings Navajo artist, Tom Whiterock, who learned the skill of beading after watching his mother.  Slim and streamlined, straight and true, decorated with beadwork and feathers in red, black, and white, a symbol of the west, we loved it.  We decided to buy it and mount it on the wall of the little red trailer as a totem for us on our journey.

We’d spent much longer than anticipated, and were hungry when we came out.  Luxuriating in the bars of service, we pulled up Maps on the iPad, searching for nearby food recommendations.  Low and behold, there was a little place called Magnolia’s right nearby, with top ratings on Yelp.  “Unbelievable food.” “Shockingly good grub” “Best food truck food I’ve ever had.”  How could we beat it?  Location: 1 minute walk.  Turns out it was the turquoise school bus in front of the museum!  Maslow was smiling now.  We ordered a burrito and three tacos, including the recommended “Sweet Magnolia” sweet potato, mushroom, goat cheese” and their homemade hibiscus aqua fresca.  It was so good, we ordered more for the road.  Mmm..mmm.  Who knew that the West’s best tacos were right there, roadside in Utah?

“No animal without wings could cross the deep gulches in the sandstone basin at our feet. The stream which we had followed and whose course soon became lost in the multitude of chasms before us was not the one we were in search of but an unknown, unnamed river, draining the eastern slope of the Aquarius Plateau and flowing through a deep, narrow canyon to the Colorado River. Believing our party to be the discoverers, we decided to call this stream, in honor of Father Escalante, the old Spanish explorer, Escalante River, and the country which it drains the Escalante Basin. – Almon H Thompson, Second Power Expedition, 1872

If I haven’t said it already – Utah is vast.

It’s hard to give the reader a sense of just how vast it really is.  Perhaps numbers will help: the Grand Staircase Escalante National Monument is over 3000 square miles (nearly 2 million acres, larger than the state of Delaware) of badlands, buttes, and canyons, with few people and plenty of life to admire, for those who delight in such tenacious flora and fauna as the sagebrush, the lizard, and (my personal favorite) the small but might cryptobiotic crust.

In the midst of this arid wonderland sits the medium-sized roadside town of Escalante.  All that civilization in one place reminded us that we were ready for a real shower and some clean clothes.  We assumed these amenities would come attached to a room and bed, though with Rocinante so cozy and comfortable, they would be a just a formality for us.  We started to ask around; the hotels were full but some friendly inquiring informed us that a shower and laundry facilities could be bought separately from a bed – what a deal.  For a fiver, “Outfitters” offered the use of a clean, quaint bathhouse with lovely fresh warm flowing water.  Then for about the same at an RV park just a bit further, we could wash a few loads and bury our faces in warm fluffy towels straight from the drier.  For a total cost of less than $15, we had clean bodies and clean clothes once again. 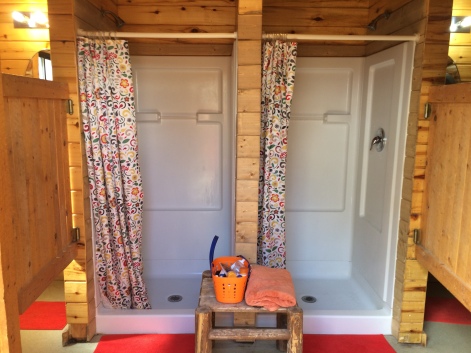 Waiting for laundry gave us a chance to explore the immediate surroundings and we came across a little natural grocer there in Escalante.  Inside was a haven of granola freshness.  Organic vegetables, goat milk soaps, and gluten free crackers lined the brick walls.  Like the cinnamon roles at Gifford House, there were delights awaiting the early risers – fresh french bread every morning.  She also gave us a tip on where to stay; just up the canyon was Hole In The Rock Road, where campers frequently stayed the night, presumably awaiting the morning’s french bread.  We packed up the organic veg and her good advice (no bag needed, of course), and soon found ourselves once again in a quiet community of isolate campers on public land, each claiming for a night a piece of land and a stunning mountain view. 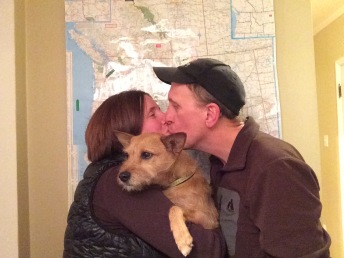 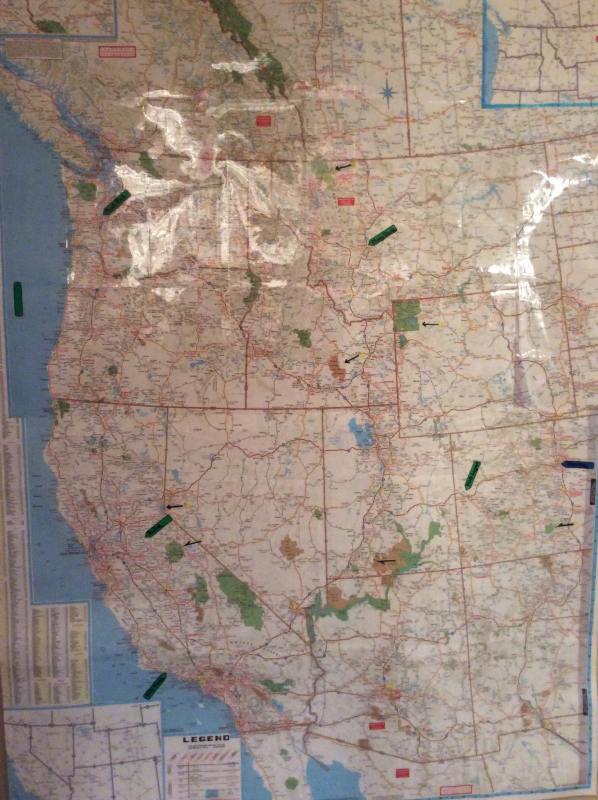 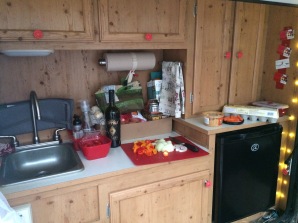 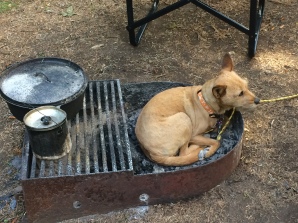 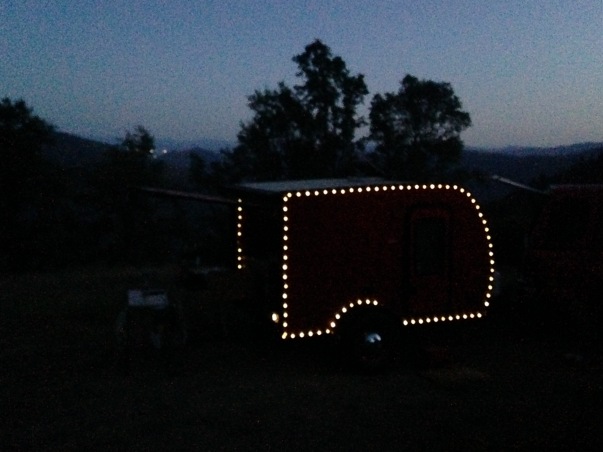 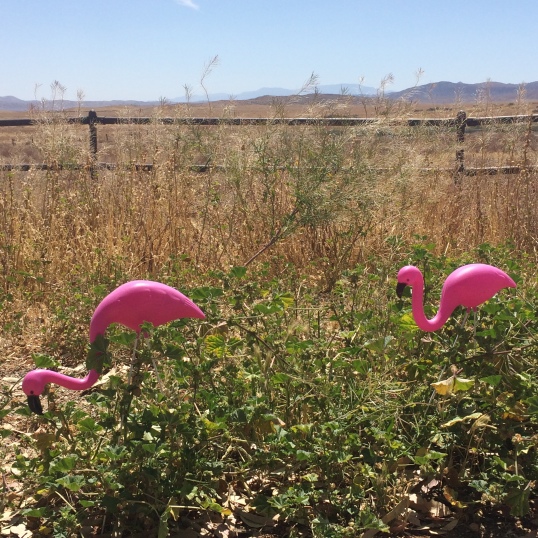 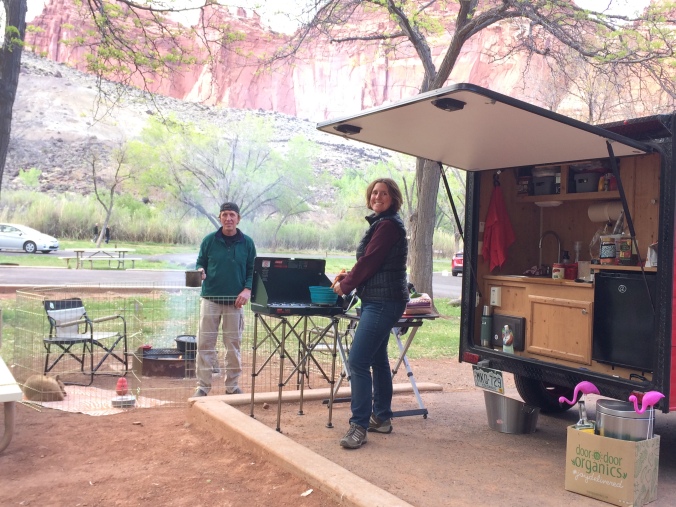 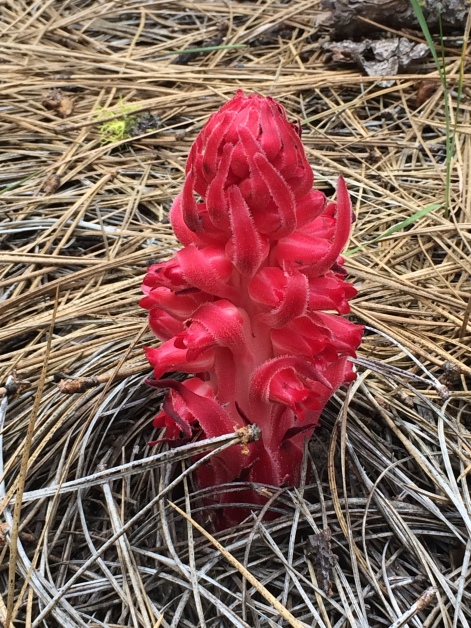 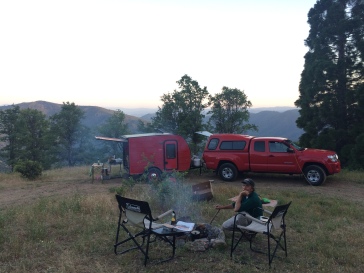 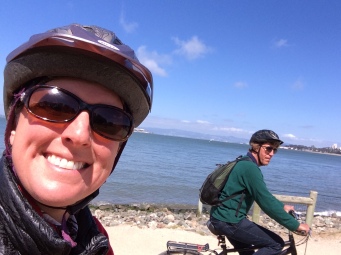 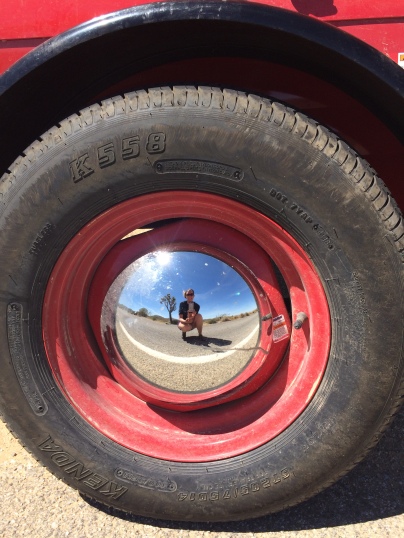 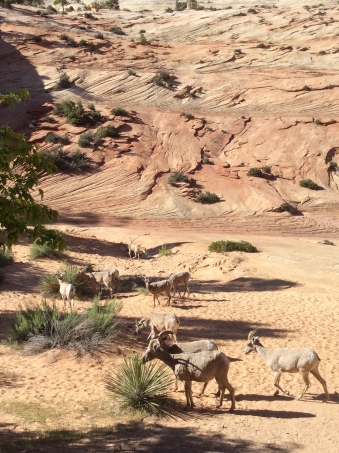 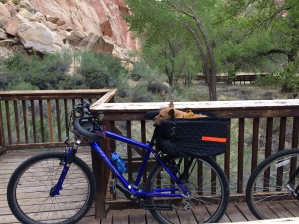 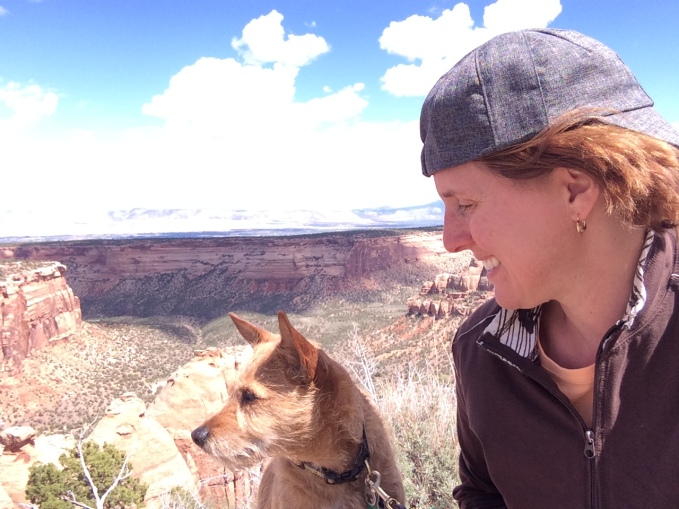 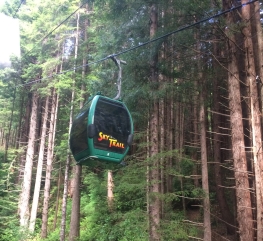 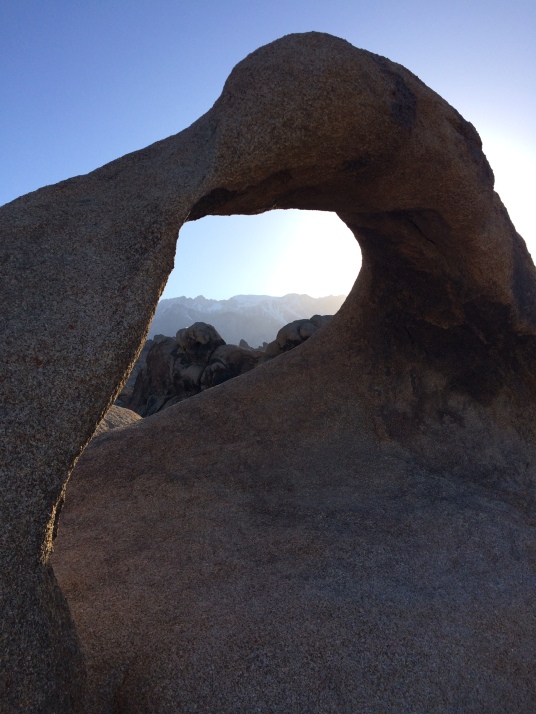 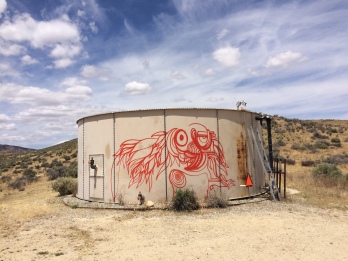 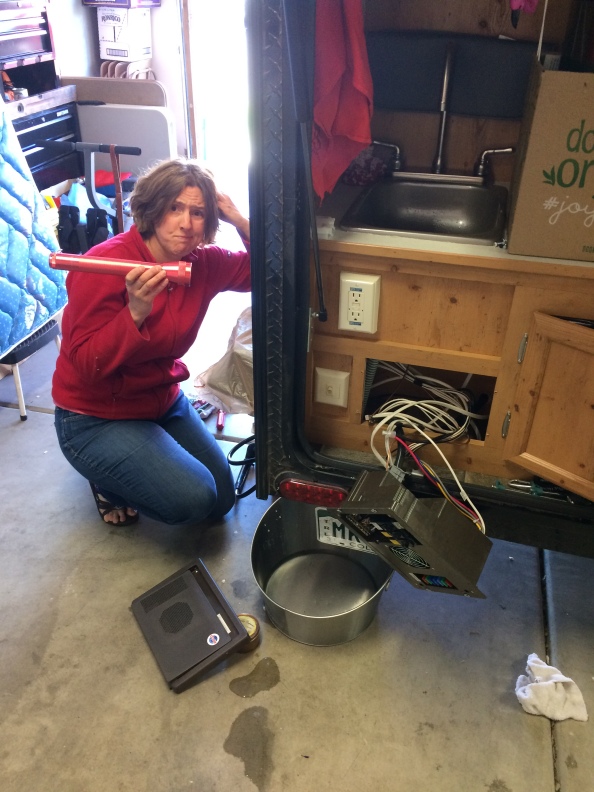 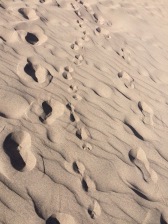